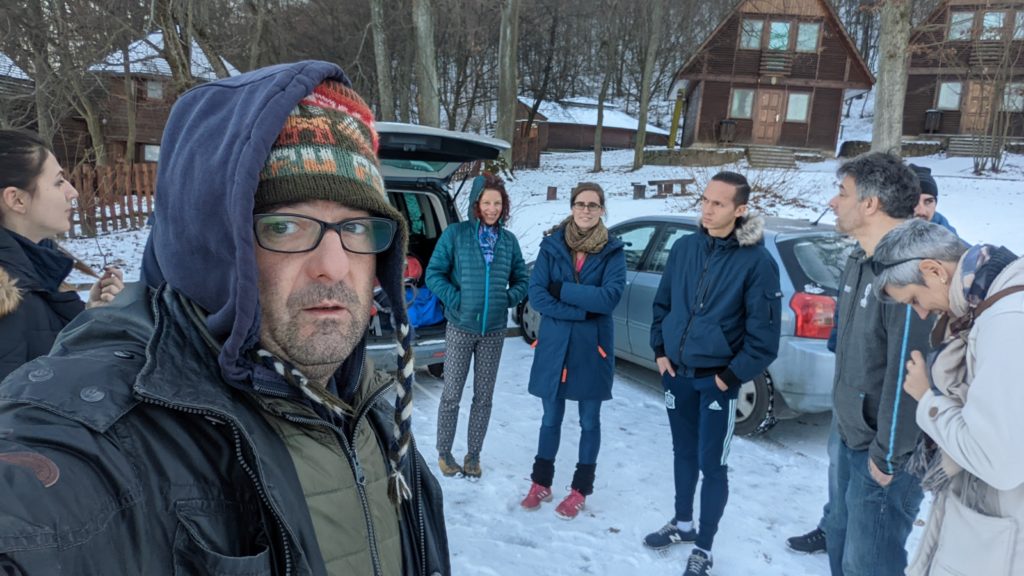 András Rákos
András grew up in Hungary and Egypt and became a social worker. He started his career in an orphanage then moved on to manage a refugee and homeless shelter in Budapest. He was working as a social worker with homeless people when he organized a team of 8 youths from the shelter where he worked, and decided to take them to Cape Town to the Homeless World Cup. During the tournament in Africa he realised that football has more power to encourage hopeless people than anything else he had seen before. From that point he is a committed fan of the method of social skills development of people on the margin of society through football.

András Szalay
He was a leader of the tendering team at Oltalom Charity Society where his work connected to Oltalom Sports Association. However, he found himself in closer relations with OSA when writing a winning project application titled IRIS in the framework of Erasmus+ Sport. He is now managing freshly submitted project applications and projects under implementation especially with regard to their financial planning and reporting. „This job can be done efficiently only if one identifies with the social goals of OSA, which is quite easy for me. Assisting the social inclusion of socially disadvantaged groups, especially that of the youth is an elevating experience. I hope to write successful project applications in the near future and to implement domestic and international cooperative projects.”

Dora Gottgeisl
After graduation I applied to study sociology and then after a few years of work here and abroad, I continued my studies in social work, where I specialised in crisis and trauma management. The time spent there has increased my interest in the effect of human and nature caused catastrophes on individuals and those different therapeutic opportunities which help to process them.
At OSA I primarily coordinate national and international projects, however according to my interests I not only participate in management but I also have the possibility to involve in the professional work of implementation of these projects and in social work conducted with players of the association.

Tímea Turcsik
I studied at Pázmány Péter Catholic University as a social pedagogist, where I worked with young and adults people in law enforcement. In one of my research at penitentiary, it has become clear that most people see the best re-socialization opportunity in sport, and for many, this is the only stable thing they can trust. In addition to the love of football, this was another reason I applied for the job, I believe that sporting behavior appears outside the field in players daily routine, helping to break down the barriers between different social groups.

Frigyes Hegyi
Even in the kindergarden my sign was a ball, and football is one of my biggest passion ever since. I met my closest friends trough playing the game, I gained lifetime experiences, and learned a lot about myself and about life as well. I strongly believe that this sport can give at least as much or even more for others than it did for me. For this reason I am working for different organisations, to use football as a tool to strengthen local communities, develope social skills for the players and to improve social inclusion. I have trained, and organised football tournaments for players from segregated roma settlements, in children’s homes, for refugees, in penitentiary. I have met many different players with many different problems, but the ball was round everywhere.

György Molnár
After completing my legal studies, I participated as a human rights defender in the service of several non-governmental organizations. I mainly dealt with the protection of ethnic minorities and the victims of domestic violence. During my years in public administration, my interest turned to sports integration programmes. I have participated in a number of such projects, conducted related trainings, and written publications. Recently, I have studied in depth the physiological and psychosocial effects of different forms of motion. I consider sport an unparalleled channel of social integration, my aim is to strengthen its effectiveness in the programmes of OSA.

Gabriella Petróczi
As a sociologist, my interest extends to the integration effects of sport and the arts, too. I am convinced that these two tools, with their achievements in individual personality development, have a sustaining power as a barrier to social drop-out, facilitate communication between social groups and promote social cohesion. I assist the work of the Oltalom Sports Association as a project coordinator in the organization, implementation, and settlement tasks. I put my system approach and my experience in the field of statements and analyses at the service of the organization.

Gábor Lajtos
My name is Gábor Lajtos, I am 21 years old and since 2021 I am a football trainer at the Oltalom Sport Association. Before I became a trainer I attempted their trainings approximately for 6 years. Now my goal is to share my experiences with the team and also help them with my knowledge to develop to be their best selves on and off the field. For me, it is the greatest honor that with my work I can be a useful member of the club, while I try my very best to give back all the positiveness that I have received back in the day.